After a competitive tender, Orchard were appointed to develop and produce literature and other materials for the International Trade and Investment division of Scotland’s Highland and Islands Enterprise (HIE). The role of the division was to encourage overseas companies to relocate to the Highlands and Islands, as well as help indigenous companies trade overseas: a task which involved different audiences in different locations with differing objectives. Developing an International Trade and Investment brand within the existing HIE logo guidelines was also part of the remit. 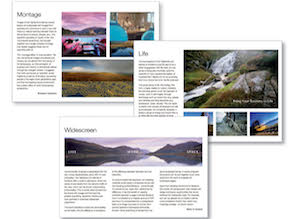 Orchard initiated two brand workshops which, in addition to looking at economic, demographic and various other statistics, also sought out the emotional reasons for wanting to live and work in the Highlands and Islands. It became obvious how important the region’s natural assets are in contributing to an enviable life/work balance and in fostering a climate in which both individuals and companies can flourish. This workshops resulted in the adoption of a brand philosophy that recognised the connection between the the region’s natural and business environments (in essence, the one nourishes the other) and led to a positioning line that could be applied equally to local and overseas companies:
‍Bring Your Business to Life. 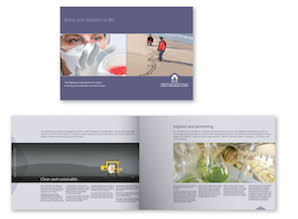 In parallel with developing a brand for HIE’s International Trade and Investment arm, Orchard embarked on the  creation of a structure for a suite of literature to address the various audiences and target markets. Top of the list was a flagship brochure which made use of photomontage to emphasise the connection between the region’s natural and business environments, as well as their importance to one another. 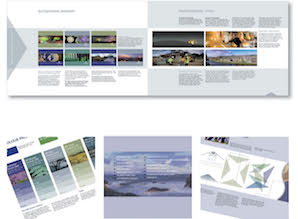 By the time the flagship brochure was printed, the division’s new brand philosophy and identity were fully formed. To ensure consistency, Orchard produced a Visual Identity Guide for use in-house and by other agencies. This illustrated how imagery, copy, layout etc. should be used and adapted across a variety of media platforms (including web-based applications).